Hard disk storage has shown remarkable increase in capacity in the last two decades, from a few megabytes to a few terabytes, while the device itself has remained roughly the same size. But will the same pace continue? Or is the venerable ‘Winchester’ ready for retirement? This article explores these questions.
Hard Disks, since the first commercial release in 1956 by IBM, have undergone relentless evolution, as shown by the chart below. As you can see, Moore’s law (exponential rise in IC density) appears to apply to magnetic medium data storage densities as well. In fact, the storage density – time curve appears to have accelerated in last two decades. This growth is driven not only by gradual improvements in technology, but also by periodic introduction of new technologies – in materials, designs, and processes.

Fig 1: Areal Density Chart from Tom’s Hardware Storage Review
There is a concern that Moore’s law for integrated circuits will soon run out of steam due to fundamental physical limits on the size of the elements that constitute the circuit chip. Similarly, there is a concern that the continuous increase in disk capacities observed so far, primarily achieved by shrinking the size of the individual magnetic data bit, is also approaching some fundamental limits. 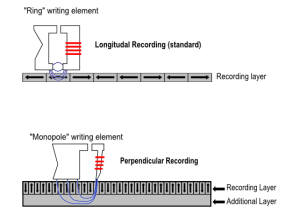 Fig 2: Longitudinal and Perpendicular Magnetic Recording (by Luca Cassioli)
Current magnetic recording technique is called Perpendicular Magnetic Recording (PMR) which superseded Longitudinal Magnetic Recording (LMR). PMR records information on a ferromagnetic layer that contains randomly shaped grains about 10 nanometer in size. Each bit of information is a magnetically oriented region containing about 60-80 grains. To increase data density, one can reduce the number of grains, reduce grain size, or both. Reducing the number of grains per data bit will decrease the strength of the signal picked up by the read head, leading to insufficient signal-to-noise ratio. Reducing the size of the grain will run into the superparamagnetic limit: magnetization in a small grain is unstable and can “flip” due to thermal effects, leading to eventual data loss (“bit rot”).

Another issue with decreasing data bit size is getting the proper head-to-media spacing. Magnetic fields decrease rapidly with distance, so the magnetic head must be positioned close to the magnetic material to generate an adequate signal. Head spacing needs to be at most 60{00650960c7c98e0cfb19b413dfe1b11628fd22333dea5da8eda402d86148a18a} of the magnetic bit size. Now, if the bit is shrunk, the head must fly closer to the medium. Disk surfaces must be made correspondingly smoother and flatter, but they are already at a surface roughness of 1 nanometer – that is 10 Angstroms, or about 10 atoms thick!

Thus the current technology, Perpendicular Magnetic Recording, already at 800 Gigabits per square inch, is expected to max out at about 1 Tb per square inch. So is Moore’s law about to run out of steam for hard disk drives? Well, perhaps not. Moore’s law is not a physical law; instead, it essentially tracks the power of human ingenuity that continuously evolves existing techniques. There are several new technologies being worked on that may push hard disks beyond the 1 Terabit per sq in barrier. We will look at some of them in the following sections.

If small grains are thermally unstable, why not use materials with higher magnetic coercivity that will resist this tendency? Unfortunately, high coercivity materials require stronger magnetic fields to magnetize, while a reduced magnetic bit size requires a correspondingly smaller write head, with correspondingly smaller field strength. Heat Assisted Magnetic Recording (HAMR) finds a very ingenious way out of this dilemma.

Coercivity decreases substantially when temperature rises above a critical temperature called the Curie point. HAMR adds a pulse of heat to the magnetic bit just before the write head applies its magnetic field. Since the magnetic material is hotter than its Curie point, it is easily magnetized. The magnetic bit gets quickly quenched by the surrounding material, locking the magnetization in place. It is amazing to realize that all this happens while the platter is moving at 50-100 km per hour with respect to the head poised just a few nanometers above it. The whole action of heating, magnetization (writing), and cooling of one magnetic bit takes about 1 nanosecond! The cycle repeats without pause. 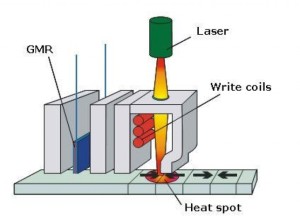 Shingled Magnetic Recording takes a radical approach to crowd the magnetic bits closer together. It so happens that read heads are smaller than write heads (a hard disk drive has different heads for reading and writing) – sensing a magnetic field for reading is easier than generating a strong enough magnetic field for writing. In conventional recording, the write head lays down a line of magnetized bits that is wider than the area sensed by the read head. The next track is laid down after a gap so that its magnetization does not disturb the read head on the first track.

What would happen if the next track was written substantially overlapping the first track, yet enough of the old track was left intact for the read head to walk on? My initial reaction to this concept was, “Hey, this sounds crazy!” But it appears to have proven quite feasible to write such overlapped tracks and then safely read them back. This technique is called “shingled magnetic recording” in an analogy to roof shingles. This packs at least 25{00650960c7c98e0cfb19b413dfe1b11628fd22333dea5da8eda402d86148a18a} more tracks in the same platter with promise of more gains later — with just a change in write-head design. A few hundred shingled tracks (about a GB worth of data) form a unit of writeable storage, and then there is a gap to the next set of shingled tracks.

Unfortunately, there is a price to pay for the overlapped tracks. How does one do a random write to such an overlapped track? One cannot. The whole set of overlapping tracks have to be written out afresh. Now this could have been an unacceptable compromise some years back. But the Achilles’ heel of flash memory, the need to block erase a whole page of flash at a time, appears to have softened attitudes. In fact, the techniques developed to overcome flash limitations (the “FTL”) are proposed to be applied to shingled magnetic recording. Secondly, they are currently being targeted for use cases that do not issue many random writes – archival storage, for example.

Isn’t this a curious example of independent evolution? Such radically different devices as NAND flash and magnetic storage on rotating platters both using an address translation layer because they cannot perform small random writes.

Current magnetic storage technology, perpendicular magnetic recording, uses a film of ferromagnetic grains that are magnetically isolated (loosely exchange coupled) from each other. Some 50 odd grains comprise a magnetic bit. These grains are written with their magnetization aligned so that the total field adds up to a value that the read head can reliably sense. The loose exchange coupling keeps adjacent magnetic bits isolated from each other but it also encourages thermal instability.

What if we used stronger exchange coupling between the grains? One could then shrink the grains yet maintain good thermal stability. That is exactly what happens in patterned media. Isolation between magnetic bits is still necessary, which is achieved by physical gaps in the magnetic material between adjacent bits.

There are formidable technical challenges here, but we will not go into the details. The basic idea however is simple: A track will consist of a row of extremely uniformly spaced, uniformly sized, tiny ferromagnetic islands inlaid in a sea of non-magnetic material. Unlike real islands, the overall platter surface is physically extremely flat so that the magnetic head can fly smoothly over it. Each ferromagnetic island is a strong stable magnet, possibly a single domain. The shrinkage factor can be 10x or more, leading to potential areal density increases of 100x or more.

Let us start from current PMR/LMR technology. The magnetic material on the platter is a film made up of randomly shaped magnetic grains about 10 nm in size. A magnetic bit is approximately a rectangle imprinted on a number of these grains. The signal for the bit (a zero or one) is a sum of the contributions of the individual grains and it is interpreted as either one or zero. But as we try to crowd tracks together using shingled magnetic recording, there is interference from the magnetic bits on adjacent tracks that limits how crowded the tracks can be. But what if one can use digital signal processing methods to measure and then correct for this interference? That is exactly what two dimensional magnetic recording proposes to do. Imagine three instead of one read head flying side-by-side over a track. The three heads are however not perfectly aligned on the target track. The central head is aligned, but the second head overlaps with one adjacent track while the third head overlaps with the other adjacent track. Now use the input from the outer heads to cancel the noise faced by the central heads to produce a cleaner signal of the target track.

One can also consider a digitized extension of this concept, where, instead of a single track of physical bits matching one to one with logical bits, there are n parallel tracks that encode m logical bits onto n physical bits. The n physical tracks are narrower and less reliable, but by using error correction coding one may reliably recover m logical bits yet still achieve higher bit density. In the limit, this should get close to getting 1 bit per grain. We get all this without control of shape or placement of the (random) grains.

Although not a technology that increases areal density directly, this is an example of how to squeeze more capacity into the same form factor.

In order to build higher capacity disks, why not pack more platters in the same height? Of course, the mechanical assembly that swings over the platters has to be made thinner, but that should be feasible. Interestingly, there is an invisible barrier to closely packed platters: the viscous resistance of the air. The solution? Switch to helium, which has lower viscosity. 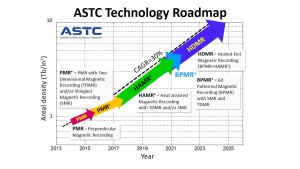 The exponential growth in hard disk storage density appears to be in no danger of slowing down in the coming decade. Hard disk drives, already available at 4-8 TB capacity, are expected to steadily climb to 20, 50, even 100 TB in the years to come. The hard disk roadmap published by the Advanced Storage Technology Consortium shows their confidence that engineering ingenuity will continue to drive Moore’s law for hard disks for another decade.

This evolution of the hard disk, however, also has a qualitative aspect to it, as noted by Jim Gray more than a decade ago. Just as dinosaurs evolved into birds that are qualitatively different from their ancestors, the 100 Terabyte disk drive of next decade will likely be more like a slow-moving, massive dinosaur than the relatively agile 10-100GB disk drives of the past decades. In fact, in behavior it is moving closer to that of magnetic tape drives: Limited access bandwidth and poor random access performance, and so it would end up primarily within second-tier storage. It would have completely lost its place in primary storage, that it ruled for several decades, to flash storage (or perhaps the successors of flash).